Action Alert: Support an Increase in Funding for Farm to School in New York State 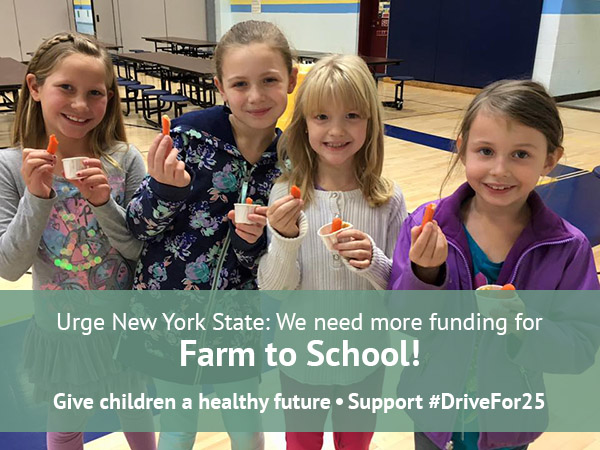 This week, members of the New York School Nutrition Association visited their NYS Assembly and Senate representatives to request an increase in the reimbursement of School Meals tied to purchasing New York-grown and raised foods. They asked them to voice their support of Farm to School in their respective house Budget Proposals.

Read the letter of support to Assembly Speaker Carl Heastie that is being circulated by Assembly Rep. Addie Russell, Chair of the Task Force on Food, Farm & Nutrition Policy, to her colleagues. It asks for their sign-on to the letter by Friday, February 5th.

For those of you who can, and if your Assembly Representative is a Democrat (in the Assembly Majority), please contact your Representative today and urge her/him to sign on to Assembly Rep. Russell’s letter by calling Sean Ewart in her office at (518) 455-5545. If you don’t know your NYS Assembly Rep, click here.

Also contact your NYS Senator and ask that he/she support the Farm to School Procurement Incentive in their Senate Budget Proposal. If you don’t know your NYS Senator, click here.